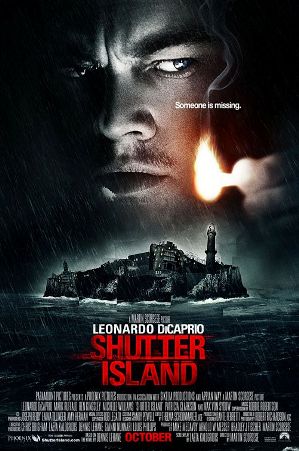 Shutter Island is a 2010 American psychological thriller film directed by Martin Scorsese. The film is based on Dennis Lehane's 2003 novel of the same name. Production started in March 2008. Leonardo DiCaprio stars as U.S. Marshal Edward "Teddy" Daniels, who is investigating a psychiatric facility located on the island named in the title. The film grossed over $128 million in its initial domestic theater release.

Shutter Island was originally stated to be released on October 2, 2009, but Paramount Pictures pushed the release date to February 19, 2010.

In 1954, U.S. Marshal Edward "Teddy" Daniels (Leonardo DiCaprio) and his newly assigned partner Chuck Aule (Mark Ruffalo), go to the Ashecliffe Hospital for the criminally insane on Shutter Island located in Boston Harbor. They are investigating the disappearance of Rachel Solando, a patient who apparently vanished from a locked room, leaving a note behind that reads:

Dr. John Cawley (Ben Kingsley), the head psychiatrist, explains that Rachel was institutionalized after drowning her three children, but has been refusing to accept the reality of being in a mental hospital.

During the search for Rachel, Teddy sees a lighthouse but is told that it has already been searched. He asks to see the hospital personnel files; Cawley refuses, but allows the Marshals to question the staff. They are frustrated to learn that Rachel's psychiatrist, Dr. Sheehan, left on vacation after her disappearance. That night, Teddy has a strange dream in which he sees his wife Dolores Chanal (Michelle Williams), who was killed in a fire two years earlier. She tells Teddy that Rachel is still on the island, as is Andrew Laeddis, the arsonist responsible for her own death. Daniels then concludes that "67" from Solando's note is Laeddis, whom he believes to be the institution's allegedly non-existent 67th patient.

In the morning, they interview patients from Rachel's group therapy sessions, one of whom distracts Chuck and warns Teddy to run. Later, Teddy reveals to Chuck his ulterior motive for taking the investigation. Andrew Laeddis was sent to Ashecliffe for his crime and then disappeared, motivating Teddy to investigate the institution. He met a former patient, George Noyce, who claimed that Ashecliffe experimented on patients. Teddy is determined to bring the institution down.

Cawley informs Teddy that Rachel has been found and presents her to him. The delusional Rachel (Emily Mortimer) mistakes Teddy for her husband who died in World War II, and then becomes very agitated. Later, Teddy develops increasingly severe migraine headaches accompanied by hypersensitivity to light. In his sleep he has more strange dreams, followed by waking hallucinations. He is now determined to search for Laeddis in Ward C, which houses the most dangerous patients. There he finds Noyce (Jackie Earle Haley) who is afraid of being taken to the lighthouse, where lobotomies are performed, and tells Teddy that the entire investigation is a game constructed for him.

Teddy rejoins Chuck and they head to the cliffs surrounding the island, intending to reach the lighthouse. Eventually, Chuck suggests that continuing is too dangerous and Teddy goes to the lighthouse alone. He is unable to reach it, and when he returns, Chuck has disappeared. Looking for him at the foot of the cliff, Teddy finds a woman hiding in a cave who confirms his suspicions by revealing that she is the real Rachel Solando (Patricia Clarkson). She says that she was a psychiatrist at Ashecliffe until she found out about the experiments. She was forcibly committed to ensure her silence. She explains that the hospital is using psychotropic medication in an attempt to develop mind control techniques and create "sleeper agent" spies. She says that Teddy has been similarly drugged since he arrived on the island.

Teddy returns to Ashecliffe, where Dr. Cawley tells him that he came to the island without a partner – nobody seems to know Chuck. Teddy eventually makes it to the lighthouse but finds nothing unusual on his way up the stairs, contrary to what he expected. At the top of the lighthouse, he finds Dr. Cawley who reveals that Teddy is not Edward Daniels, but ex-Marshal Andrew Laeddis. Cawley says that he has been a patient at Ashecliffe for two years since he murdered his manic depressive wife in a fit of rage after discovering she had drowned their children. Cawley explains that Rachel Solando never existed, neither as patient nor psychiatrist. "Chuck" then arrives and reveals himself as Dr. Sheehan, Andrew's psychiatrist; the woman who was presented as Solando the patient turns out to be a nurse. Sheehan and Cawley state that Andrew lived the fantasy of still being an active U.S. Marshal, searching for Andrew Laeddis as a means to disassociate himself from what he had done. They show him that the names "Edward Daniels" and "Rachel Solando" are anagrams of "Andrew Laeddis" and "Dolores Chanal", respectively, thus constructing "the law of 4" (four names) and affirming Laeddis as being "67".

Cawley explains that Andrew has gone through repeated cycles of realizing the truth, only to regress into his fantasy again, during which he has injured multiple orderlies and patients, leading the administrative board to demand a lobotomy as a permanent solution to his problem. Sheehan and Cawley explain that they decided to try an experimental therapy, in which they created the role play of "Rachel's" disappearance based on Andrew's fantasy. They say they hoped that by failing to uncover his mind-control conspiracy, Andrew would see reality and return to it permanently. Andrew appears to accept Sheehan's and Cawley's explanations, blaming himself for ignoring Dolores' mental illness until she killed their children. Experiencing yet another migraine, which causes a flashback of the traumatic event of his wife's and children's death, Andrew faints.

The next morning, Andrew once again calls Sheehan "Chuck" and mentions exposing the Island's doings to the outside world. Sheehan silently signals to Cawley, and orderlies approach to take Andrew for the lobotomy. Andrew asks Sheehan whether it would be worse to "live as a monster, or die as a good man". He then walks off calmly with the orderlies.

Scorsese, you still GOT IT ;)

Thanks, mate! That is a brilliant movie, you've got a taste, man

What can I say about this movie? Honestly, Scorsese keeps amazing and impressing us! Personally, he is the master of Cinema! The man is one of the most brilliant directors of our time. Anyway, let me talk a bit about the actual movie; I saw it a while ago and now I have to write this while I'm thinking about how stunning it was. Shutter Island is certainly not a typical film, not even for Scorsese. It is a different take for the director, and he does it, as he does every film, perfectly! I don't want to give anything away [No spoilers], but I will say this: Shutter Island was completely unexpected, it was the kinda movie that makes you think of how it's gonna end and then it surprises you completely, as it happened with me. This picture had all the components of a great film, and then some. The acting is spot on from every character; none of it seems forged or out of place. I gotta give it to Leonardo DiCaprio, he was great

The script is fantastic; it has one of the most intriguing plots I have seen in a while. The story is complex. It takes some attention. At times it's a bit bleak and dire. Of course it all makes a little less sense when you actually think about it but then again that's film. There are a couple of moments where the story gets lost within itself. Things become a bit too complicated. At this point you might begin to lose faith in its viscosity, but don't worry because the story has you right where it's put you. Plus, everything, down to the set's lighting, was perfectly executed, the cinematography was breathtaking. I will say that not everyone will like this; Shutter Island, again, isn't your typical movie. To those, though, who do choose to see this film, be ready for a compelling, gripping, thought-provoking experience, so much so that you might think to see it again for further clarity (I know I did; it was so entertaining and my mind was blown!).

In short, this is a psychological and frightening masterpiece that will make you scared, will make you think. This is one of the best films of the year 2010. See it, with an open mind and prepare to be blown away.

P.S: Thanks again, but I just thought that after you watch the movie, you give us your own personal opinion/experience ! Rather than Wikipedia's !

hhhhhhhhhhhhhhhhhhhhhhh, u should see the look at ur face man "you give us your own personal opinion/experience ! Rather than Wikipedia's !", just kidding brother, no offense. Concerning the movie I haven't seen it yet, (I guess I don't have a good taste after all lool), I saw it once it was in the box office, and I said for a moment: "wait a minute could it be!!! that's the kind of movies I like", and when it comes to movies brother, there is something u should know; I'm the one u have to choose, let's say I have this instinct toward movies, I can feel whether a movie worth to watch or not...

I feel that we have something in common after all, we like the same movie, the only difference had been that, u watched the movie, but I didn't, I better get going, thanks for the comment, at least we have someone aware of the cinema, thx again

haha ! Well, you seem like a film buff, if only you follow it by watching those movies lol! Apparently, you seem to have what most people don't have (The movie instinct), if it's worth your time or not. But as I said, this particular movie "Shutter Island" is unpredictable, and trust me, I have seen the previews, but when I watched the whole movie, it just ended differently from what I was expecting.
I have the movie on DVD, I wish I could give it to you, chum

Ok, then, have a fantastic day, maybe we'll get the chance to talk another time

And hey, I'm going to beat you when it comes to movies lol

So, buckle up, mate

I like the intense of yours, certainly. Perhaps you are good as you pretend to be, and thank you, but I have the movie in HD screen.

have a great day, and I'm sure that we'll have another chance to talk, pal

haha ! I even have that nickname printed on my shirt

Well, good for you then, enjoy watching the movie